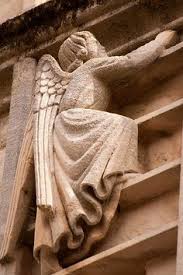 On February 28, I was honoured to give the sermon at Evensong at St Catherine’s College. The service, led by Reverend David Neaum, was absolutely wonderful and it was very moving to be a part of it. The sermon was based on the two Lessons – Genesis 28: 10-19a (Jacob’s ladder) and John 1: 35-end – and is reproduced below.

As a child, I used to puzzle over the way the Lessons were paired in the Anglican calendar. You’d leave church one Sunday in the midst of something – say, a parable being told on a sunny Galilee morning – and come back a week later to something completely different: Paul nagging the Ephesians, for example. There was a strong sense that you were being allowed just a glimpse of the great body of practice that went on without you all the rest of the time.  Actually, like every bored child who has browsed the back pages of Common Prayer during the sermon, I understood that the Collects are rotated by the complex, somewhat astronomical, calculations of the Church Year and, though I didn’t know about the Lectionary, I guessed that something similar must apply to the Lessons.

Actually, in Church or out, I thought of the two Testaments as two great wheels – something like those monumental, ratcheted mill mechanisms made of iron and wood – that caught on each other in a giant clockwork. Like the fourteenth century Cathedral clock at Wells, for example. It was not uncomforting to feel oneself being rocked within, or encircled by, such a giant mechanism.  It seemed like being located within a cosmogony.

It’s striking how much more readily we make ourselves at home if we can only find a system, whether or not it works like this, with which to tame what the American Biblical scholar Robert Alter translates as “the welter and waste”, the tohu wabohu, with which Genesis opens.  Dolls houses and train sets, maps, even astrology (which of course also forms one intersecting dial of the clock at Wells) – all do this for us, at various times. They allow us to set our world in order. In other words, they are rehearsals for a cosmogony.

Closely related to this sense of cosmogony is the encyclopaedic praise song.  One such praise song is the glorious taxonomy of “Dews and frosts… Lightnings and clouds…” of the (somewhat meteorologically-preoccupied) Benedicite; the canticle that Morning Prayer sometimes offers (through another of those calendrical mechanisms) as an alternative to the Te Deum.  Another is, arguably, the creation story of Genesis 1 itself.  In their own way, those great founding hymns of American secular humanism, Walt Whitman’s Song of Myself and – written exactly a century later, and despite its title – Allen Ginsburg’s Howl are both encyclopaedic praise songs, too. Both of these long poems are wonders of persuasive rhetoric.  Both are built out of the Judeo-Christian tradition of taxonomy as cosmogony, which would have engaged their first audiences by its sheer familiarity. Name everything, and you name both plenitude – which is celebratory – and comprehensiveness.

What made the Lessons of the turning Anglican Church Year “catch” on each other was, I guessed on those long-ago Sundays, how they corresponded.  All I had to do was, week by week, to find that correspondence.  And so begins, albeit in an incoherent, childish form, the life-long hermeneutic struggle to apprehend what, beyond their surface narratives, the passages selected “meant to tell us”.

For the “whole” of truth goes far beyond the literal. Emily Dickinson’s “tell the whole truth, but tell it slant,” reminds us how using metaphor – whether the narrative metaphor of a parable, or the condensed metaphor of symbol – is about clarifying, not occluding, truth. We can often “explain ourselves” most easily by “going by way of that which we are not” (to paraphrase T.S. Eliot, and St John of the Cross). Conversely, as listeners, we often go best by way of a detour into what we are.  It’s easier to approach certain mentally indigestible kinds of things, such as mystery, in-articulable complexity, or vast scale, “at an angle” or “from the human angle”. It’s no coincidence that scientists, too, often resort to parable when trying to explain truths that, though empirical, far outstrip our personal sensory experience.

And so to listen interpretively to the Lessons is to listen faithfully. As words like “testament”, “covenant”, “prophecy”, “message” and “call” make clear – we are addressed, and so expected to find out what we’re being told.  Some of that finding out is painstakingly logical – much of it is expert – but some of it is intuitive, or even apparently illogical. Thus, the Bulgarian psychoanalytic philosopher Julia Kristeva, who showed us what everyone who’s worked in mental health care knows – that language breaks down into musical, phatic, repetitive elements when someone gets close to saying “what ails them” – speculated in a recent Guardian interview that she learnt to listen to the music in language during the Orthodox Church services of her childhood.

This non-literal, musical listening past the surface also happens when a child is lulled towards sleep by a bedtime story.  The voice of a loved and trusted adult mingles with each story’s near-magical ability to arrange the world into a little cosmogony of its own. The effect of attending Church from childhood, perhaps even from before you can understand the words themselves, is somehow related to this. There’s a sense of being drawn home; of liturgy as that home.

Perhaps part of a life in poetry is refusing to lose this evocative, musical element of listening and telling. Mystery is not merely a quality of language; but language can be wonderfully useful in bringing us towards it.  I always think that it’s to this – the Other, the unknowable ­- that each short line of a poem gives way.  The opening of Rainer Maria Rilke’s First Duino Elegy is a great example of a poem explicitly carrying us towards, and releasing us into, mystery:

Who, if I cried out, would hear me among the Angelic
Orders? And even if one
Suddenly clasped me to his heart I’d shrink
From his more intense being. So beauty
Is nothing but the beginning of a terror that we scarcely endure…

The Lessons and the Psalm for this evening’s service all speak to each other, and to us, of this theme of calling or crying out, and calling towards. They’re full of the push-me-pull-you of a longing that is as heartfelt as it is fearful. (The human longing for God is perhaps always mixed with a desire not actually to encounter Him – or anyway, not quite yet.)

Tonight’s Second Lesson is taken from Chapter One of St John’s Gospel. In other words, it follows that great vision of truthful telling: “In the beginning was the Word”. And it recounts an often-forgotten story, about the ambivalence with which many of the disciples answer their “call”.  They need “proofs”, the test of the miraculous or of logic, before they answer the repeated call of “Come and see”.

The call is predicated upon their response: upon their coming and seeing.  Every call needs a response. That dialectic logic is also at the heart of Praise Song, the tradition that alternates leading call and congregational response. The passage from Genesis 28 that is the First Lesson – Jacob’s desert dream, in which he is promised a teeming posterity and the land he lies sleeping upon – is a call and response, too.  The New Testament is Christianity’s response to the call of the Old Testament; sure enough, the Lectionary’s pairings are designed to show the two catching on each other. Today’s Second Lesson, which ends with Jesus promising “you will see heaven opened and the angels of God ascending and descending upon the Son of Man,” answers the call of Jacob’s dream, in the First, “that there was a ladder set up on the earth, the top of it reaching to heaven; and the angels of God were ascending and descending on it.”  With this echo Jesus makes his huge claim: to be the fulfillment of that prophetic vision.

Tonight’s psalm, Psalm Twelve, is a song of both praise and longing for the language of truth; for something beyond the verbiage of lies, boasts or flattery. Verse Six is a lovely example of parallelism intensifying – purifying – its image. Here’s it’s man who calls, and God who replies:

The promises of the Lord are promises that are pure,
silver refined in a furnace on the ground,
purified seven times.

The two Lessons and the Psalm echo and chime with each other, then, like a three-note chord; a perfect triad.  And the image of Jacob’s ladder is at the heart of this, a vivid symbol of call and response between heaven and earth.  It’s also, as centuries of church artists have found when they come actually to realize it, an unwieldy one.  How big is the “ladder”? How can angels pass each other on it? In the twelfth century Lambeth Psalter, angels mount a ladder angled on a rakish diagonal, whose rungs are twice as widely spaced as any human climber would need. On the early sixteenth century West front of Bath Abbey, the ladder rungs are stone Vs that angels “climb” headfirst both up and down.  And so on.

In fact, the Hebrew word occurs only here and might with equal logic mean a stairway or a ramp; Robert Alter points out that the phrases “its top reaching the heavens” and “the gate of the heavens” are also associated with the Mesopotamian ziggurat/s. But I like the notion that early translators of the Bible didn’t have any such archeological knowledge, and translated what they didn’t understand into something they did.  In the homely image of a ladder, they take us towards mystery by way of the quotidian.

That seems to me to be what poetry does, too. It does not, and could never, behove us to speak from a position of authority, but only to come and stand in the familiar, humble place of possibility, of John Keats’s famous “uncertainties, mysteries, doubts”, where everything we don’t know begins. It’s this presence in the space at the end of the line, as at the edge of a cliff, that I believe we write towards:

and inattentive then
I saw the end is air
and falling it is clean
and lovely it is blue.