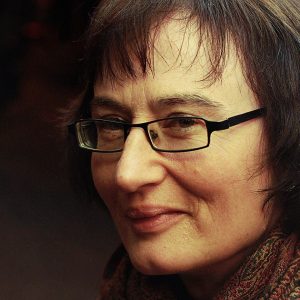 Music has always played a huge part in my life.  Before I became a writer I was a concert violinist: I had a wonderful time, studying and working with figures like Pierre Boulez, Sir Michael Tippett, Yehudi Menuhin (at his Academy in Switzerland), Sir Simon Rattle – and even Vangelis!

Since then I’ve always been delighted when my poems have been set by classical composers – including Rough Music by Stephen Goss; Tree Carols by Sally Beamish (which receives a second outing in Oxford by Roddy Williams and the Coull Quartet at St John Evengelist on June 23rd; and Bee Sama by Luminita Spinu. In December this year a setting of Stone House by Rudolf Komorous will be performed at the national Canadian Music Centre, in celebration of the composer’s 85th birthday, while Harrison Birtwistle is currently setting Three Sonnets for the Nash Ensemble – watch this space!

In my life as a poet, music has remained a touchstone: the relationship between poetry and music is both fundamental and complex. It’s a relationship I explore in my new book, Lyric Cousins: Musical form in poetry, which will be published by Edinburgh University Press in October. I’m fascinated in particular by the notion of ‘breath’ – how this most human of activities both produces and delimits that which is musical and that which is poetic.

But underlying all of this remains my practice as a musician. While I no longer play, the skills, discipline and art – especially the art – of the violin still inform my poetry. Tonight on Radio 3, in The Essay at 10.45pm, I’ll be talking about my life as a violinist, and how it remains part of who I am as an artist. The episode is also available now to listen or download. The link is here.